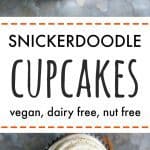 If you’re a cupcake fan, do I have a recipe for you!

I love cupcakes – they’re the perfect sized dessert. Fluffy cake, creamy frosting, all perfectly packaged in a paper wrapper – cupcakes are just right for anything from a birthday party to an afternoon tea.

Thankfully, it’s easy to make cupcakes without eggs or dairy! This recipe uses simple ingredients, and the end result is scrumptious. You’re sure to enjoy these vegan treats.

These snickerdoodle cupcakes are spiced just right with vanilla and cinnamon in the cake, and the frosting has some cinnamon in it as well. I just love this combination – it’s warm and cozy and so wonderful with a cup of tea.

3. Use a mixer and mix the batter on low speed.

4. Spoon the batter into a cupcake pan that is lined with paper liners.

6. While the cupcakes are cooling, make the cinnamon buttercream frosting.

7. Pipe or spread the frosting on the cooled cupcakes.

Store leftover cupcakes in an airtight container. They should stay fresh for about 4 days.

You can freeze these cupcakes if you like. If you’re a food allergy parent, it’s nice to have some safe cupcakes in the freezer for when you need to send one to school with your child. I recommend freezing these in separate containers for best results.

I used a disposable piping bag and a 1M piping tip to frost these cupcakes. You can use any kind of tip that you like, but I find that the 1M is very easy to work with, especially if you aren’t very familiar with piping frosting on.

To frost these, hold the piping bag straight up over the middle of the cupcake, squeeze the bag, and make a clockwise spiral until you reach the edge of the cupcake. 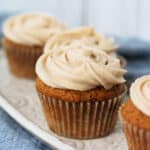 These snickerdoodle cupcakes are perfectly spiced and have a delectable cinnamon buttercream icing. You'll love these vegan cupcakes!

Store leftover cupcakes in an airtight container. They should stay fresh for about 4 days.

You can freeze these if you like. Wrap them separately, and store in the freezer for up to 3 months.