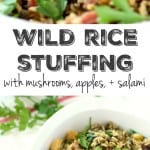 This wild rice stuffing is full of flavor and texture from salami, mushrooms, and apples. This is a delicious addition to your holiday meal! 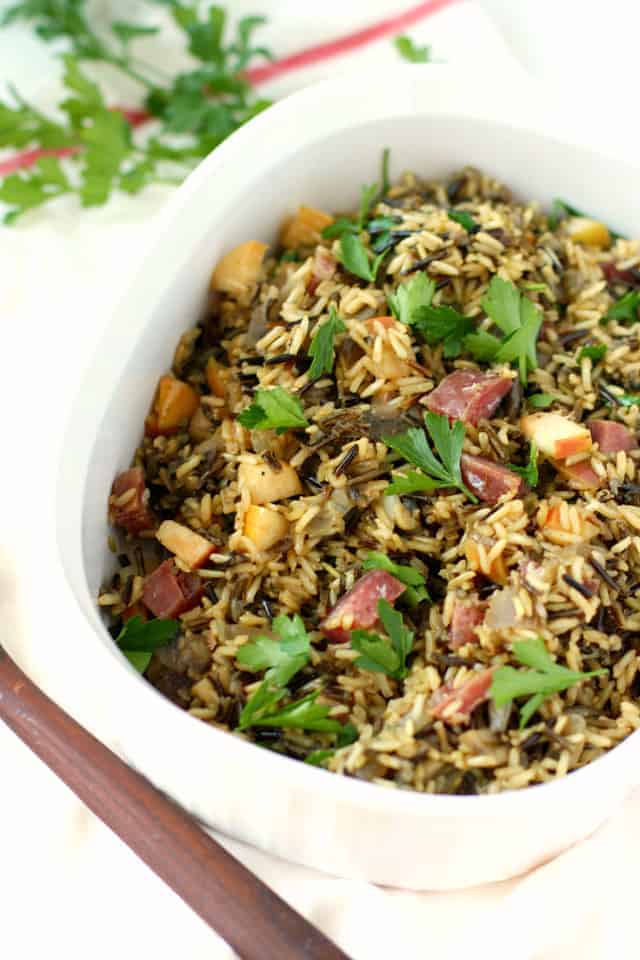 This shop has been compensated by Collective Bias, Inc. and its advertiser. All opinions are mine alone. #PairsWellWithHolidays#CollectiveBias

Holidays can certainly be a challenge when you have special dietary needs, can’t they? Whether you’re dairy free, gluten free, nut free, or something else, it can be tough to find recipes that fit your needs.

When I first tried to have a gluten free Thanksgiving, the major stumbling block was the stuffing.

I was used to having a bread based stuffing, (as was Darryl). My mom makes awesome stuffing, and of course she didn’t want us to miss out, so she made her stuffing with gluten free bread. Since gluten free bread is SO pricey, it was probably the most expensive stuffing ever made. :)

I wanted to come up with an alternative to bread stuffing for those who need to have a gluten free recipe on hand for the holidays. Since rice is readily available and inexpensive, I thought that would be a good starting point.

A wild rice stuffing is so versatile – you can add so many different ingredients to make it unique and flavorful. I decided to make this version with onions, garlic, mushrooms, apples, and (secret ingredient alert!) salami. 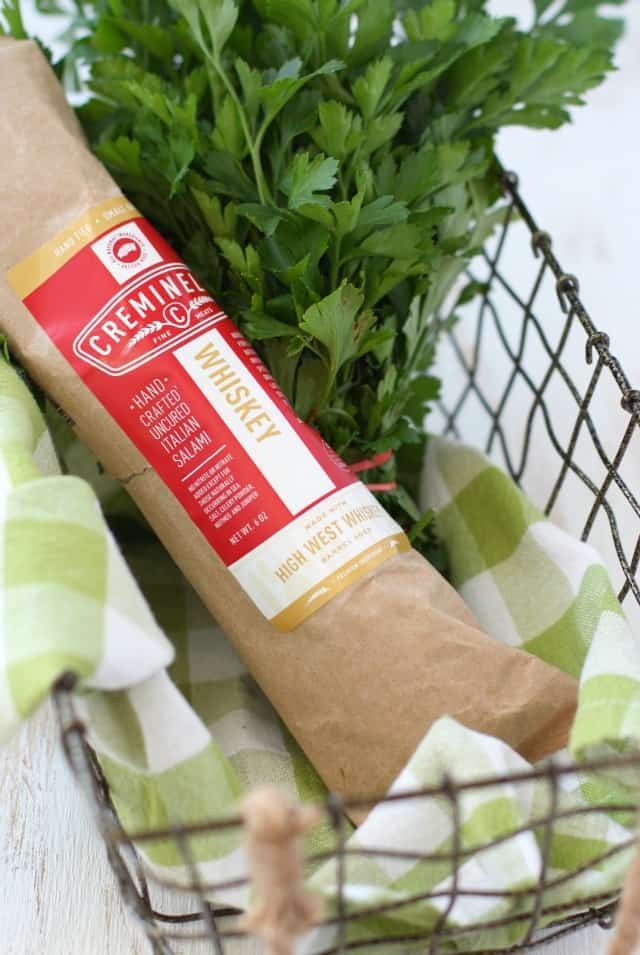 I know that salami might not be the most traditional stuffing ingredient, but I was so pleased with the way Creminelli Whiskey Salami paired with the flavors in this recipe. The salty salami complemented the sweet apples along with the mushrooms and onions. Creminelli salami is gluten free and made with all natural and organic ingredients. It’s also free of synthetic nitrates and preservatives. 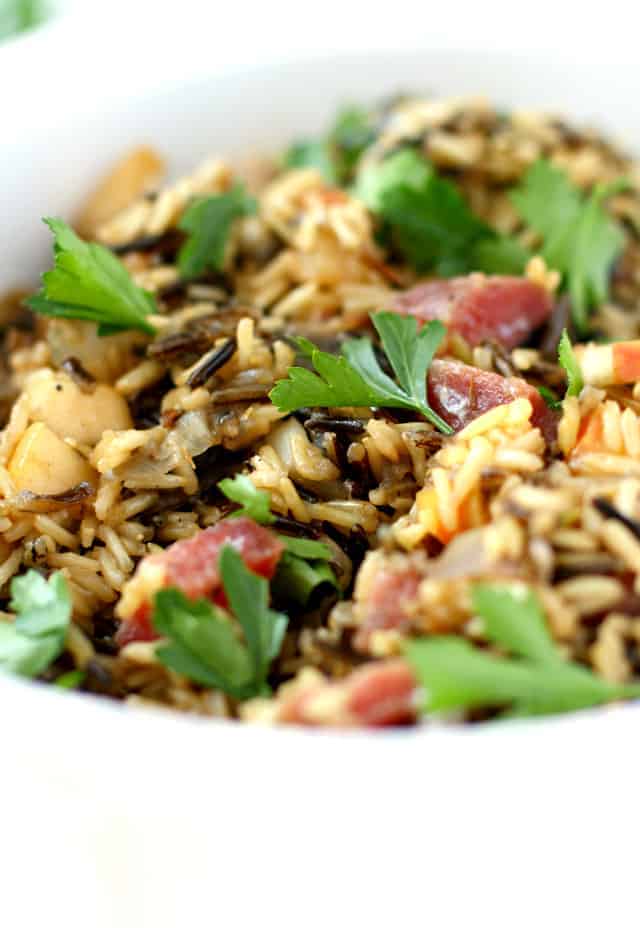 Using salami in this wild rice stuffing rather than sausage saved me some time in the kitchen. I didn’t have to cook the salami – I simply added it near the end of the cooking process. There was no time spent cooking sausage and then cleaning an extra pan. I’ll take all the time savers I can get during the holidays! 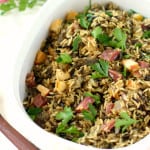 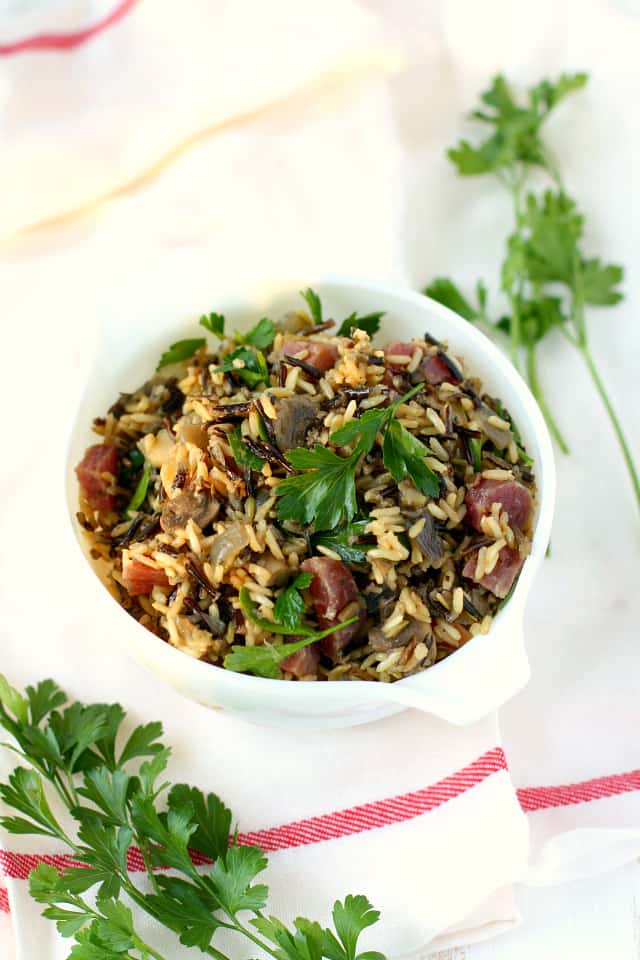 I found Creminelli Salami in the fancy cheese area at my local Whole Foods. 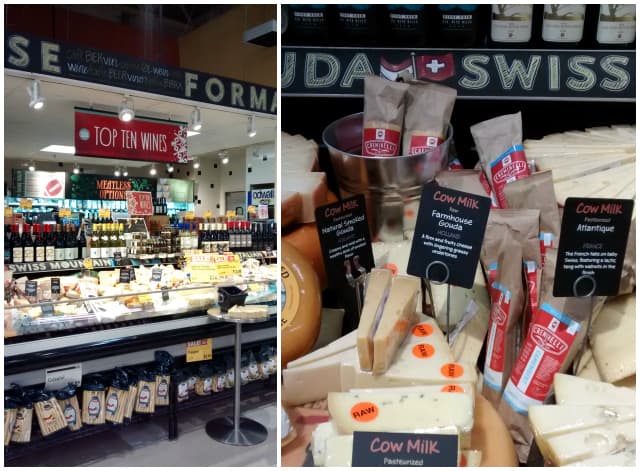 Creminelli Salami pairs well with just about everything! What would you pair it with this holiday season?