Home » Laryngomalacia » So now we call him Squeaker…Part 1. 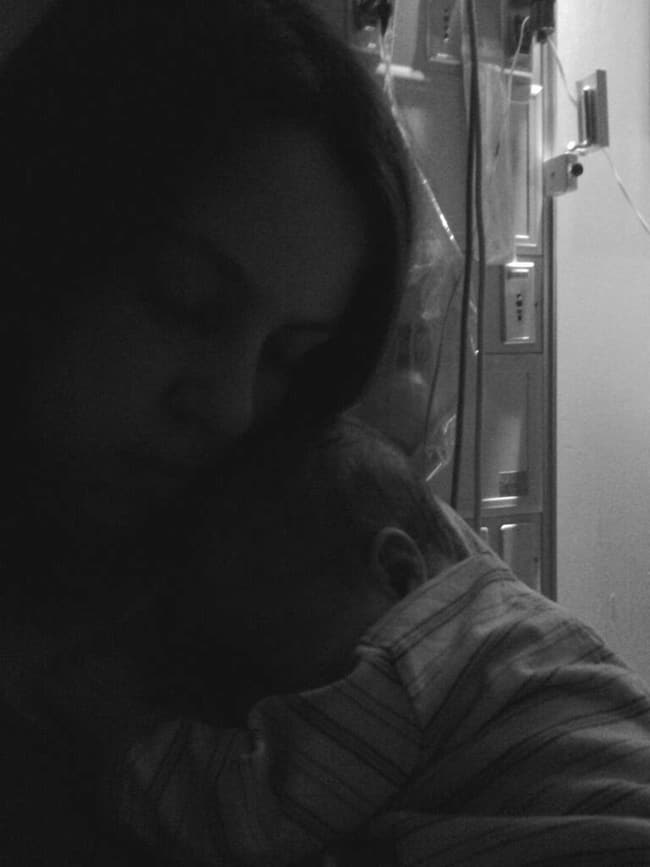 So, I wasn’t sure I was even going to post this, but I hope it can help someone else out there.  (Uh oh, whenever a post starts out that way, you know it’s going to be serious!)

When Baby Bee was ten days old, I laid him down in his bassinet and noticed that his breathing sounded different…like a little birdie.  It seemed weird to me, but newborn breathing can be weird anyway, (they snort, they stop breathing for several seconds and scare you half to death, etc), so I decided to just keep my eye on him.   The next morning, he was still doing it, so I called the pediatrician on call (it was Sunday) and she said, it’s probably nothing, but you have to take him to the Emergency Center to get checked out.  So we headed over there, and he was awake and alert and wasn’t making the noise, so they said he is fine, go home, don’t worry.

Hmm.  Frustrating.  We go home, and later when he was napping, he started doing it again, but louder.  I knew in my heart that something was not right, so I filmed him on my cell phone.  Then I spent the night holding him, because he was breathing normally when I held him, and spending time searching Dr. Google.  Oh Google, you are a blessing and a curse.  I found lots of articles about possible things that could be wrong.

The next day we headed to the pediatrician, and he was asleep, but doing the noise only slightly, so I pulled out my cell phone and showed her the recording.  She immediately said, I think your baby has tracheomalacia or laryngomalacia.  She said we need to get him into a specialist today, to see what’s going on.  She called the pulmonologist, and then came back in to say that he wanted to admit us overnight to hook Baby Bee up to the monitors and make sure that he was getting enough oxygen.  I was shocked, and my postpartum self freaked out and started crying.  I was so sad, my little baby, in the hospital?  But we headed over and he and I checked in.  We spent the night, and the monitors showed that his pulse ox was great!  Praise the Lord!  The next day, the pulmonologist came and examined him, and determined that we could just do an x-ray to confirm the diagnosis of laryngomalacia and wouldn’t have to do a scope at this time.

After the x-ray, we had our diagnosis and went home.  Only a few days later, I was holding him and noticed him making a squeaky noise, and when he did, his nostrils would flare and his chest would retract.  It was scary!  And of course it was at night, so I called the pulmonologist who said, okay we will have to do the bronchoscopy and see what’s going on, head over to the hospital again to be admitted and put on the monitors.  So we did, and the monitors looked good, and it was decided that we would do the scope the next day.  Unfortunately that procedure has to be done under sedation, and that means nothing by mouth for the patient for five hours…no nursing.  I was so nervous about that part of it!  How can you explain to a two week old that you have to wait to eat?

They had to put an IV in so he would have glucose and his blood sugar would not drop, and also so they could give him the sedative when the time came, and it was a disaster.  Four nurses tried to do it, and the NICU nurse is the one that finally did it correctly.  Why bother calling in the experienced person right away?  Please, just use my son as a pin cushion while he screams bloody murder and I’m not allowed to nurse him.  What a mess.  Also, one of the nurses made some flip comments about circumcision which made my blood boil, and I shot back with a little more fire than usual.

He had the IV in his little foot, which was better than in the scalp, which is where they were going to try if the foot didn’t work.  So sad…a little newborn hooked up to an IV…that’s pretty rough to see.

When that was done, little Baby Bee had had it, and basically shut down (who could blame him?) and slept for 3.5 hours until the procedure.