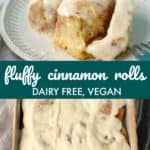 Start your weekend with a pan of light and fluffy dairy free cinnamon rolls. These are easy to make and such a treat! Perfect for a brunch or special occasion. The swirls of cinnamon and the creamy icing make these hard to resist. 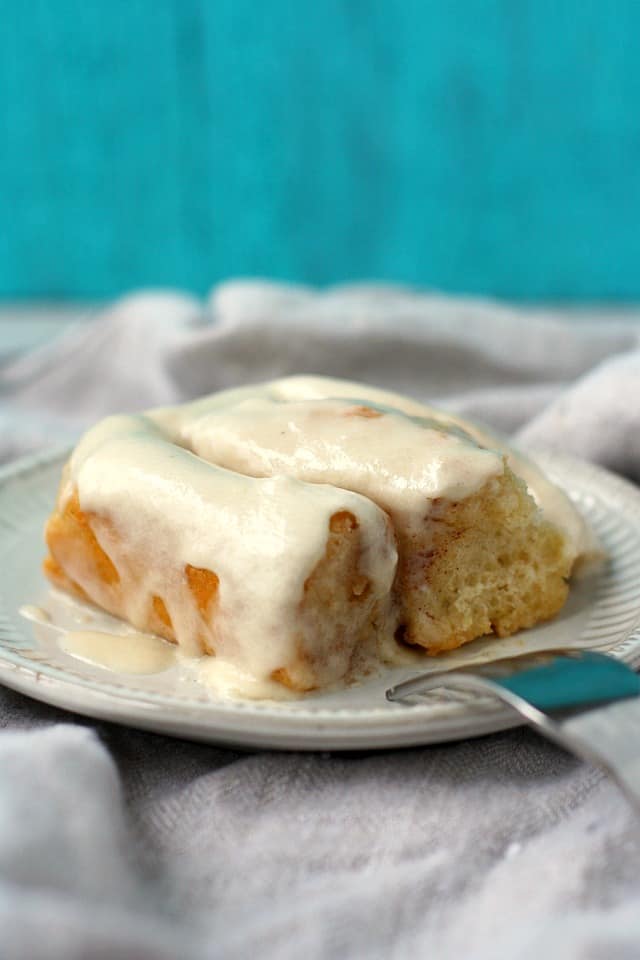 We love cinnamon rolls at our house. They are a frequent request on the weekend, or on a snow day, or really on any day.

We also love to make them on Christmas morning as a special tradition – there’s nothing better than warm cinnamon buns and vegan hot chocolate after opening presents.

Of course, anything cinnamon flavored is a big hit at our house. Cookies, apple crisp, pumpkin coffee cake, or this gluten free vegan apple spice cake – those will disappear right away around here. But cinnamon buns are a special treat, especially since you really can’t go to a bakery to get them when you have food allergies.

These cinnamon buns are free of dairy, eggs, soy, tree nuts, and peanuts – allergens that you will likely find at any traditional bakery.

We like to use spelt flour for these vegan cinnamon rolls, because my boys can tolerate spelt flour. They can’t tolerate wheat, or all-purpose flour, so we avoid that.

Spelt flour is NOT gluten free. If you need to have a gluten free cinnamon roll recipe, you may want to check this one out. 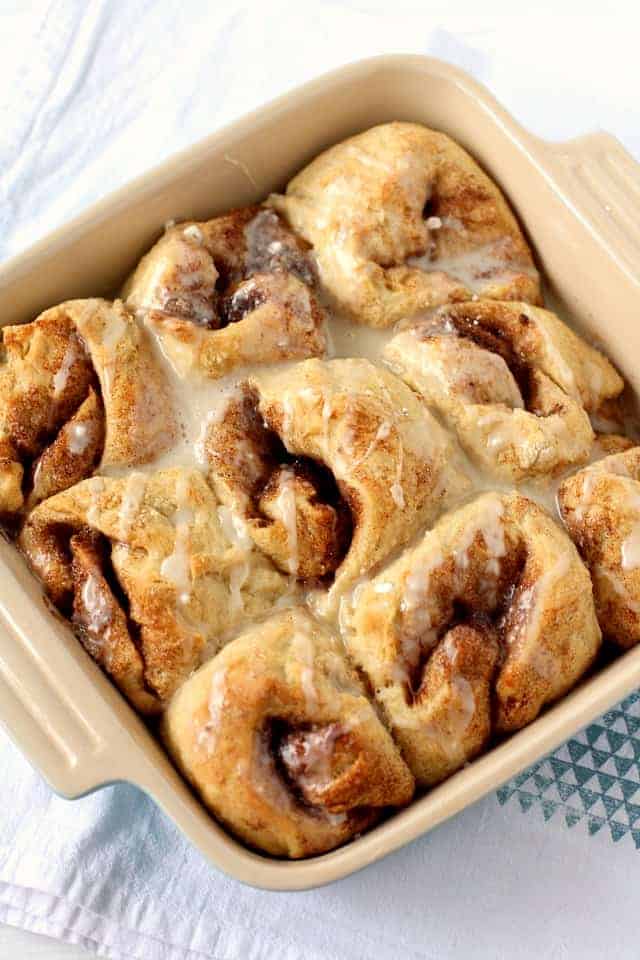 What type of dairy free milk is best for baking?

Use whatever dairy free milk works for your diet. I like neutral tasting milks best, like unsweetened coconut milk or rice milk, but you could use oat milk, flax milk, or any other milk that works for you. You can even use water for the icing if you wish.

No, spelt isn’t gluten free. It is an ancient grain that contains some gluten, although it does contain less gluten than regular wheat. Spelt is not safe for those with celiac disease.

Can this recipe be made with gluten free flour?

I haven’t tried that, so I’m not sure. If you try it, please let me know! 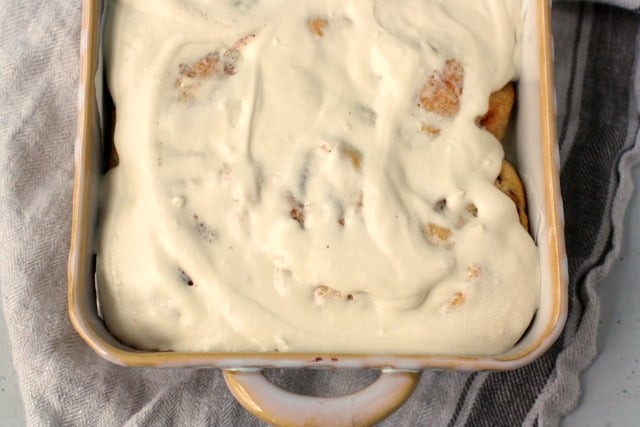 Yes, yeast is vegan. It’s a member of the fungus family. You can read more about it here.

Do these cinnamon rolls need to rise twice?

No, the dough only needs to rise one time. These rolls are perfectly fluffy with just one rise. You do need to use instant yeast – we prefer Fleischmann’s Rapid Rise Instant Yeast.

Make sure you allow the dough to rise in a warm room. If your kitchen is too chilly, you can use your oven as a proofing box – that’s what I have to do at my house in the winter.

When you mix the dough, it will come together into a ball, like this: 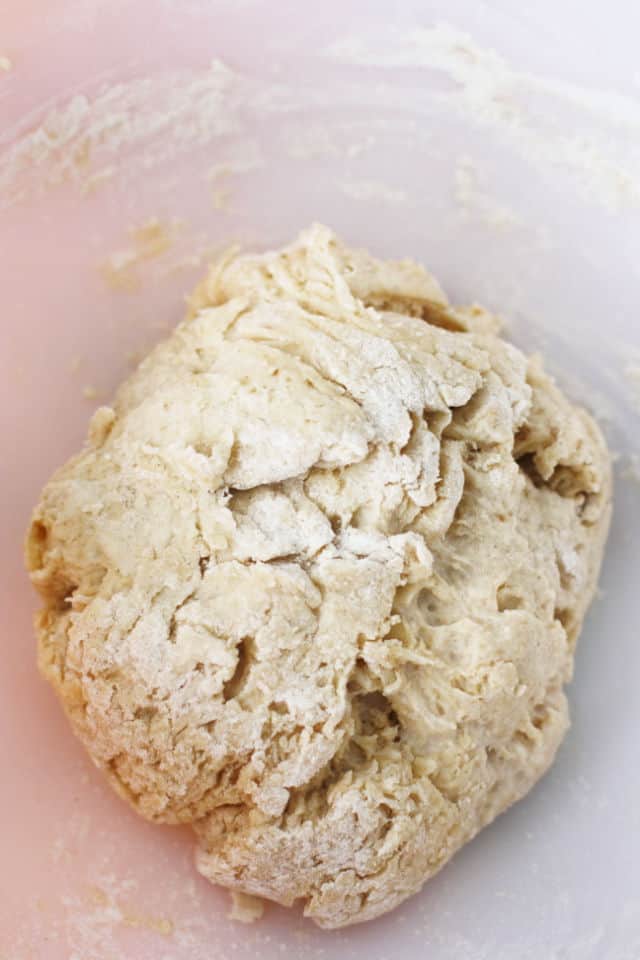 Then you’ll need to cover the bowl and keep it in a warm place for at least 45 minutes. If your house is cold, it may take a little longer.

After the dough has risen, it will look like this (very puffy and light):

How to make dairy free cinnamon rolls from scratch:

I have eliminated some steps over the years as I have experimented with this recipe. For example, I use the microwave to heat the water, I add the sugar, yeast, salt, and vegan buttery spread all at once, and I don’t oil the bowl before the dough rises.

These vegan cinnamon rolls still turn out perfectly even with those few steps simplified. We food allergy moms have enough on our plates! Anytime I can simplify my cooking or baking routine, I do so.

These are so super easy, and your family will love them! 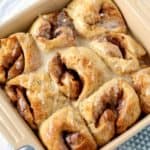 These frosted dairy free cinnamon rolls are perfect for a weekend treat! The dough is airy and fluffy, rivaling any cinnamon bun you get at a bakery.

Nutrition facts are for one cinnamon roll with glaze.

You can use all-purpose flour for this recipe.

If you aren't dairy free, feel free to use regular butter.

Adapted from this recipe. 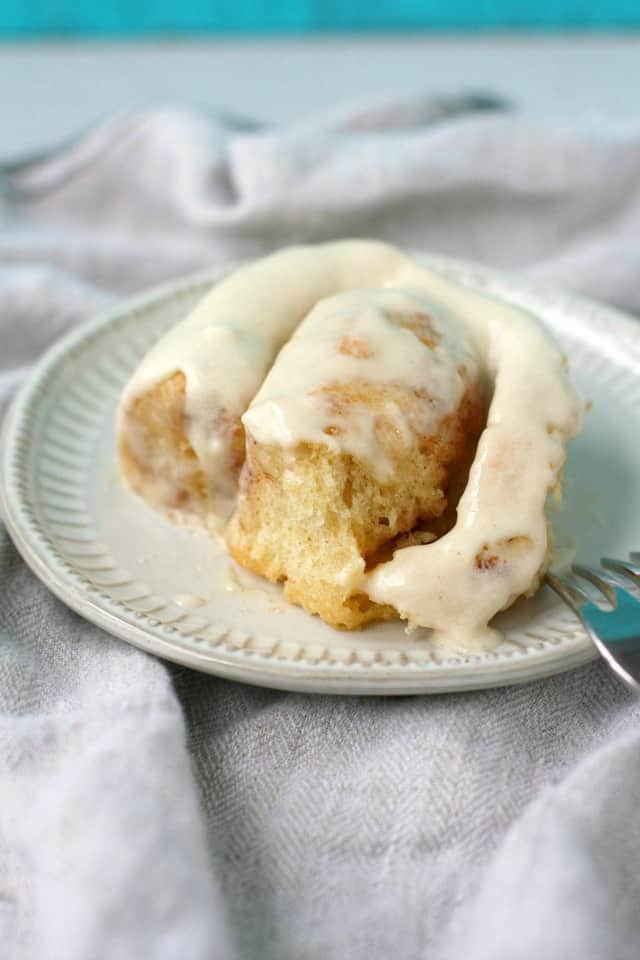